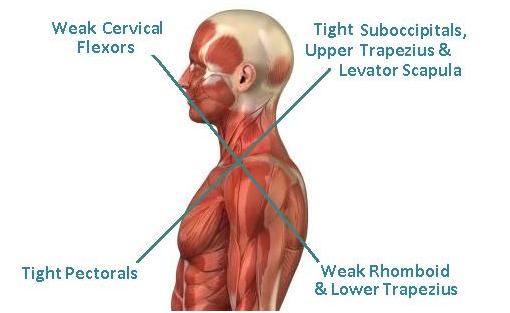 Hyperkyphosis is described as being an increase in the normal thoracic curve at the back of chest along with protracted scapulae and a head forward posture.

Like Hyperlordosis described in my earlier blog, Hyperkyphosis is a Postural dysfunction. We all have curves throughout our backs, usually describing a gentle “S” shape from head to “tail”. The limits of these curves in an anterior or posterior direction are Structural meaning they are set by the bones and beyond which we cannot move through positional changes or voluntary movement. Between these limits are the Functional or Postural curves which can be changed by voluntary effort or positional changes. This is the area which is of interest to clients and over which they can learn to have some control leading to postural improvements.

More and more clinicians and therapists are recognizing there is a greater correlation between muscular strength, muscular firing/pattening and pain than there is between a person’s basic posture or spinal abnormalities on a scan say and pain. They are realizing that the ability of a client to control the movement of  a particular body segment whilst also moving another body segment is more important than a persons static posture. Two examples of what i mean are the ability of someone to produce thoracic extension to around 20 degrees so that the shoulder joint can achieve a good position during activities like a tennis serve or whilst swimming butterfly  or the ability of a client to sequentially fire up their rotator cuff muscles (in their stability role) before the larger prime mover shoulder muscles (the Deltoid/ Lattissimus Dorsi or Pectorals) fire during a big shoulder /arm movement. For a person to be able to do either of those movements in that way means that they have the muscular control over that body segment so that they are less likely to then move into more extreme joint positions (especially under load or with high speed movements) that could produce the pain provoking tissue stress. What follows from this realization is that static body postures, hyperkyphosis etc, are only part of the story and the clinician needs to watch how the client moves (including under loads) to determine if actually they can control movements well or not. If not then that is what will require some work. All this is also outside of advances in pain science that show that a person can be in pain because processes within the brain, where the circuits that give rise to the sensation of pain,  have changed often irrespective of any postural conditions or any actual tissue damage in the area where the pain is felt. Part of this process is called Central Sensitization. Many clients with chronic shoulder issues  fall into this category where chronic pain has changed how the brain processes incoming stimuli  so that it “perceives” some simple movements as a “threat” so generating a pain sensation where previously there would have been none since no tissue has been actually damaged. As you can see our understanding of this area  is changing and evolving rapidly!

The Kyphotic curve of the thorax is a primary curve (bending forward) bending in the same direction as the fetal curve which was a complete primary curve before birth. As described in the Hyperlordosis blog the Lordotic lumbar curve is a secondary curve produced in the crawling stage of our development.

In Hyperkyphosis the curve is accentuated due to a pattern of muscles responding to stress. This was first described by Janda and called the Upper Crossed Syndrome with the cross occurring though the shoulders. Here the shoulder protracting and neck extending muscles respond to stress by shortening which consequently inhibit the posterior thoracic muscles, anterior neck flexors, Suprahyoids and Infrahyoids. This produces an increased Kyphotic curve and increases the cervical Lordotic curve (the backward bend of the neck). The muscles that shorten are  postural muscles and the ones that respond by inhibition and weakening are the phasic or voluntary muscles. This is a similar mechanism to Lower crossed syndrome also described by Janda and detailed in my Hyperlordosis blog.

There are number of consequences that can arise from Hyperkyphosis ranging from inefficient breathing patterns along with restricted rib and thoracic mobility, Thoracic Outlet syndromes due to the tight anterior chest muscles (Pectoralis Minor especially) and an increased risk of Frozen shoulder caused by the protraction of the scapulae turning the glenohumeral joint  inferiorly  so forcing the rotator cuff muscles to overwork whilst trying to maintain the humeral head in it’s proper position.

Consequences of the increased cervical curve and head forward posture from Hyperkyphosis and Upper Crossed syndrome are an increase in pressure on the facet joints of the upper cervical vertebra (and so increased pain) and to increased disc wear. The Mandible (lower jaw bone) moves posteriorly due to the stretched/inhibited anterior throat muscles which can lead to stress on the Tempromandibular joint.

The slightly strange thing with the increase in the kiphotic thoracic and lordotic cervical curves is that the thoracic errector spinae and lower cervical extensors are adaptively stretched despite being postural muscles. This is the opposite to the rest of the postural muscles in the region which are producing the Upper crossed syndrome by adaptively shortening.

Another point to note is that with the Hyperkyphosis and shoulder protraction causing internal rotation of the humerus the Subscapularis are tight and the Latissimus dorsi are tight due to depressed shoulders. 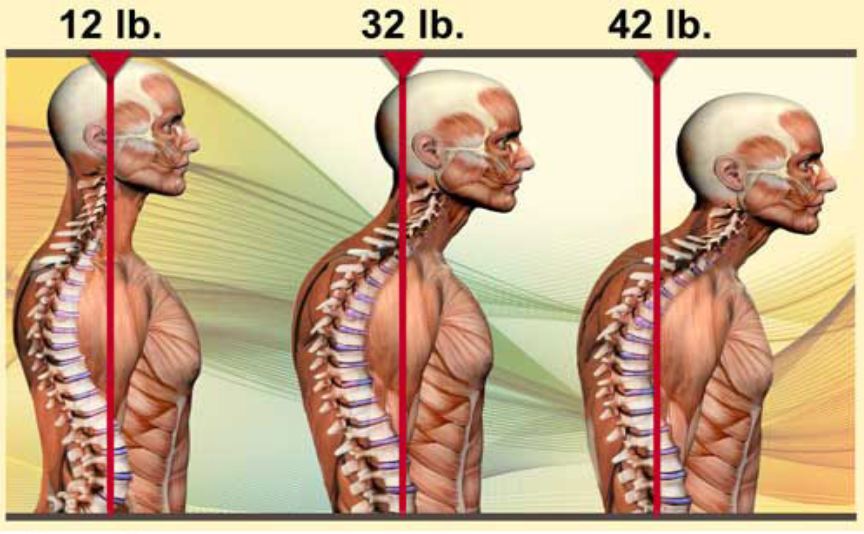 This figure highlights the dramatic effects of head forward posture on the loading of the spine. You can see that quite small differences in head forward position quickly increase the weight effect of the average 12 pound head on the loading through the thoracic spine. I cannot vouch for the actual weights shown here but it still nicely illustrates the point!

There are a number of causes behind Hyperkyphosis which are; Continual poor posture where the persons habitually slouches which can be emotional in origin such as wanting to appear shorter in quickly growing teenagers, Occupational causes such as office computer work or continual looking down at smartphones/ tablets or computer games, Overemphasis on developing Pectoral muscles whist training or other flexors at the front at the expense of the the extensors on the back of our bodies (I have heard this described as overworking our “beach muscles”!) and finally Pathological reasons such as Osteoporosis and Ankylosing Spondylitis. The pathological causes of Hyperkyphosis alter the curve Structurally by changing the shape of the vertebra or fusing them (Ankylosing spondylitis) and so are unable to be completely altered once these processes have occurred.

Finally another cause of Hyperkyposis is what used to be called “flatback” which is where the normal lordotic lumbar curve appears flat due to tight Hamstrings, posterior pelvic tilt and tight abdominals. This flatback can throw our thorax forward into Hyperkyphosis.

Like all postural dysfunctions your therapist will examine you  to work out the extent of the various underlying muscular imbalances and then work to stretch out the tight and inhibited muscles described by Upper Crossed syndrome before helping you to work to strengthen your weak and inhibited muscles. The sequence is always stretch then strengthen and it is mostly the postural muscles that need stretching and the voluntary or phasic muscles that need strengthening afterwards. Once this work has been started then again like all postural dysfuctions it becomes up to the individual to help themselves by doing all their homework! In the instances of Upper and Lower Crossed syndromes however we are all “up against it” to an extent because of the fact that our postural muscles are constantly working to keep us upright against gravity and so will daily be shortening, i.e.we all will constantly need to stretch these to combat life’s effects upon us.