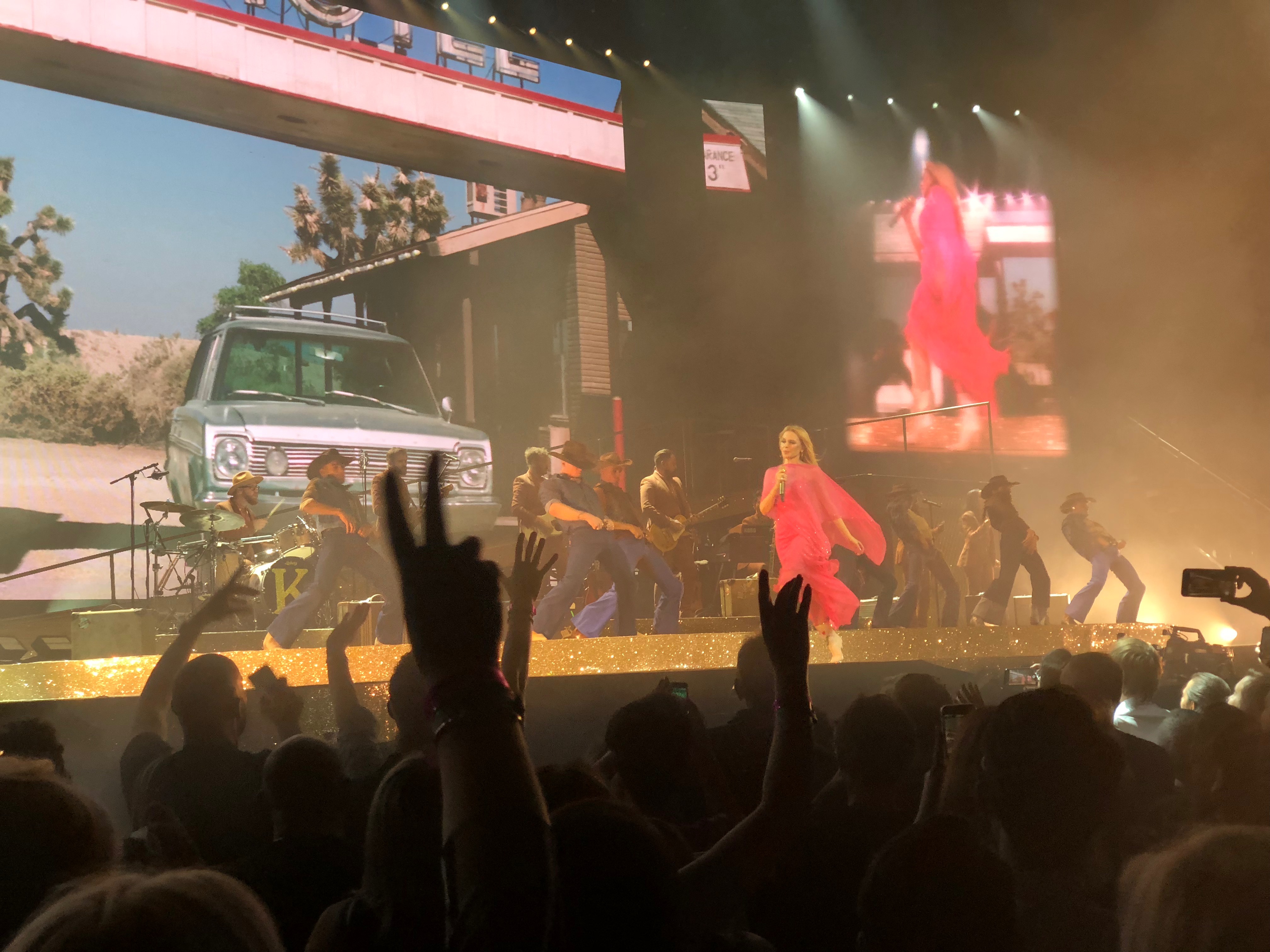 Life on a (Kylie) tour

Last year I was lucky enough to work as a therapist on Kylie Minogue’s Golden tour in the UK. I worked on a package of dates starting right at the beginning with the dancer rehearsals through to band/dancer rehearsals, production rehearsals and finally at a number of venues throughout the UK. This was my fourth Kylie tour i’ve worked on and in many ways this one was the most carefree. The album Golden, had already been a great success upon release earlier in the year with Kylie going in a new country music inspired direction. The show’s creator, Rob Sinclair had conceived the show in a US road trip style with Kylie traveling across the country complete with wild west bar sets, Shelby ’68 and motorcycle film sections and Studio 54 club set section. Plenty of sections for Kylie and cast to make the most of and for the crowds to get into with their chaps, sequins and pink cowboy hats (among other outfits!). When the tour started in Newcastle it quickly became clear to both Kylie and everyone else on the tour that this was a winning show combination! 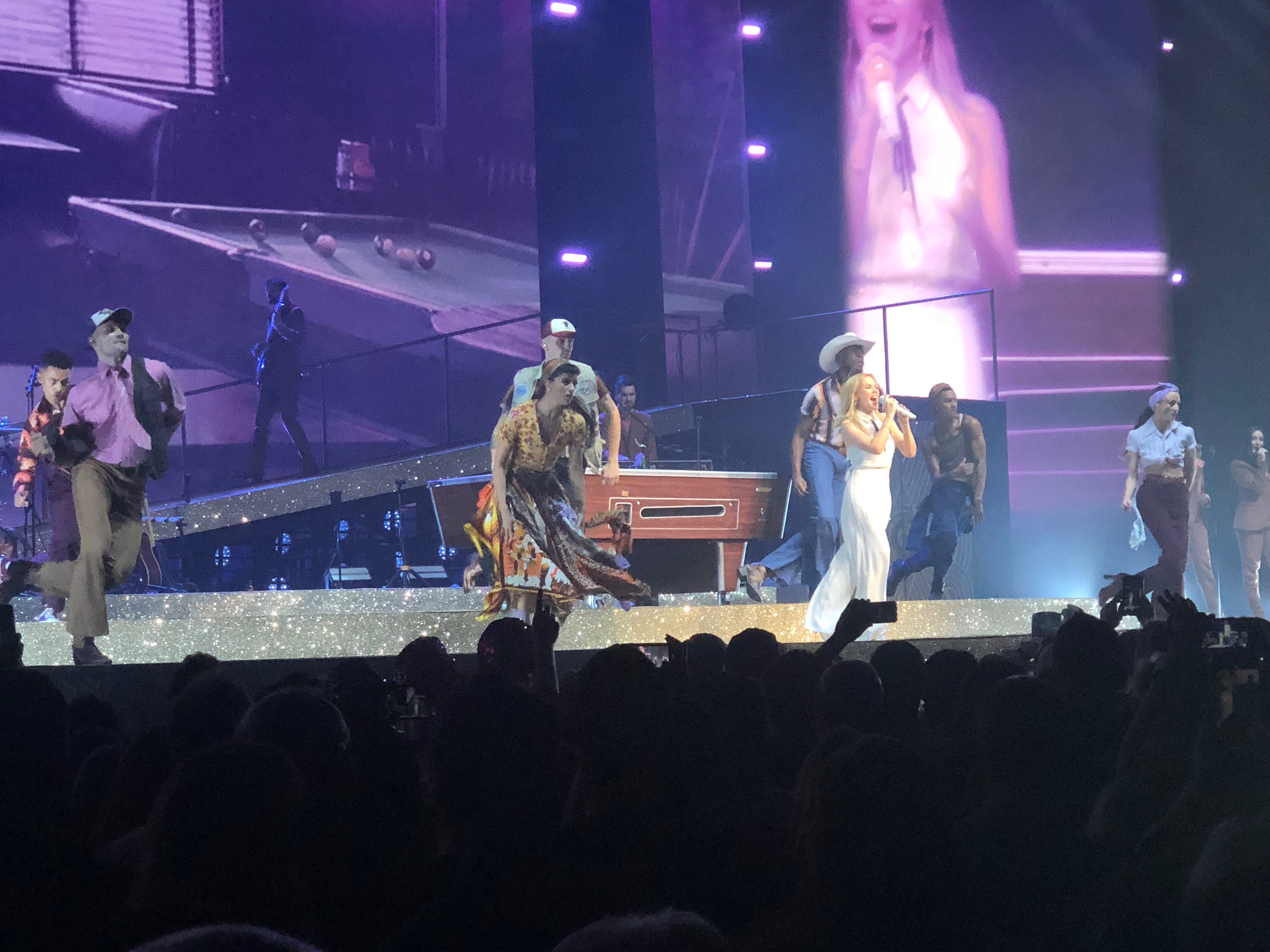 Kylie and performers on stage at the O2 London

A Kylie live show when viewed up close in the flesh is always a massive fun-filled sight. The songs performed by the band (the Hotrods) are always re-conceived and reworked for each tour (by the talented musical director Steve Anderson) with arrangements fitting the current tour theme, in this case country music of course. It is always epic, big and loud (and perhaps not what you might imagine if you’ve not seen a Kylie tour before). Kylie on stage always has the crowd in the palm of her hand, always performs big and so obviously loves what she is doing that it’s infectious! On the Golden tour watching her on the 5Oft screens in close up you are totally reminded that Kylie is a great actor too. Her show outfits are, of course, one-off design classics that dare her hardcore fans to copy. 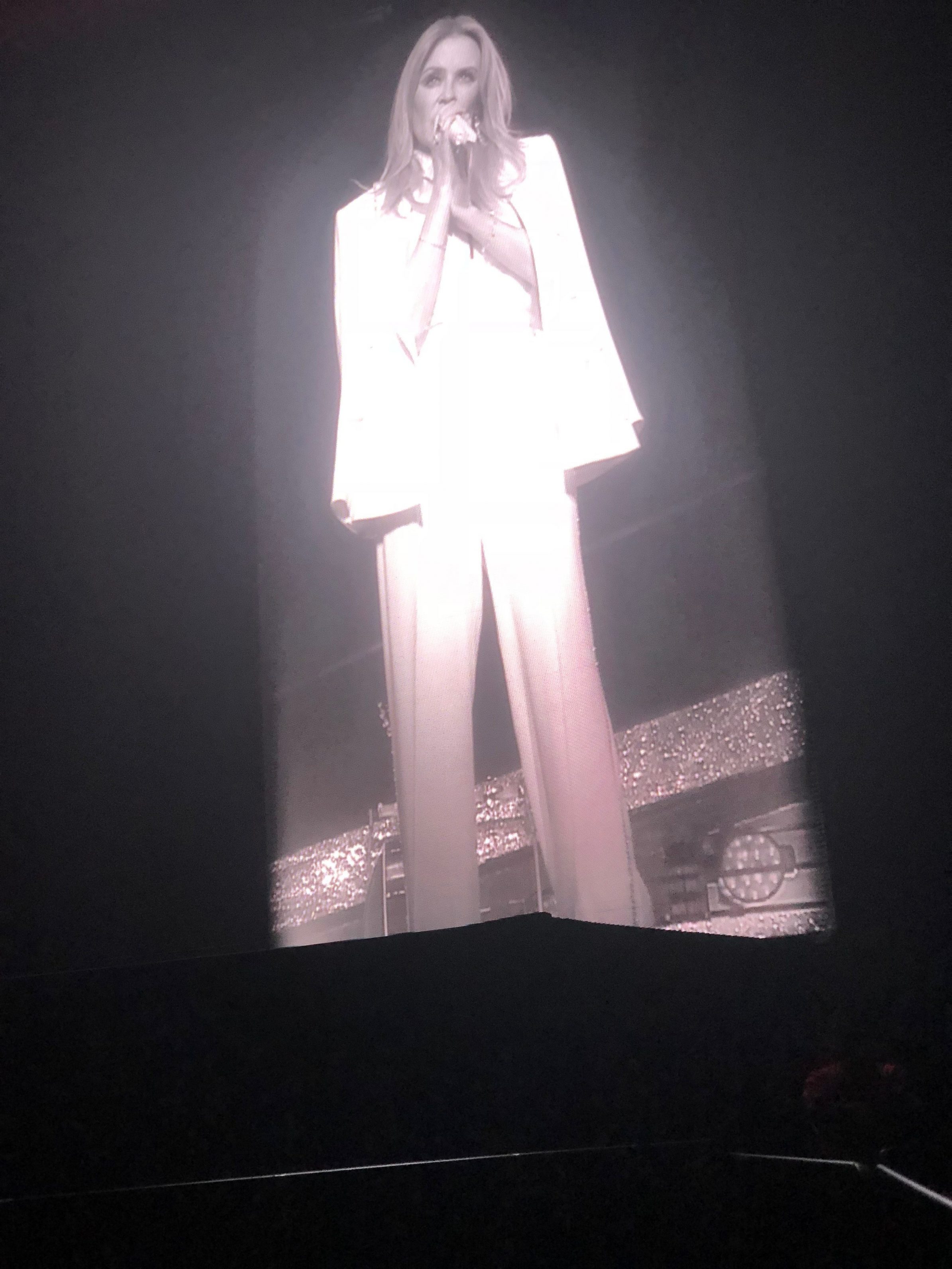 My working responsibilities are always with Kylie, the dancers and the band first and foremost but this always expands to any member of the back room staff or crew etc should they need. I’m booked for whole days and so usually will have time to fit everybody in. Once the tour is on the road the crew will often have to work multiple nights in a row taking the stage down from 11pm-3am, traveling to the next days location and then putting the stage back up by mid morning latest. It is very much a night job with many crew spending hours crawling below the stage to put in all the equipment. This is hard on the knees as you can imagine!
The dancers in comparison often keep me most busy in the early dancer rehearsals stage of the tour since they are dancing continuously all day whilst Ashley Wallen the choreographer (also of “The Greatest Showman” fame) aided by Jenny Griffin (assistant choreo and dance captain) devise and revise the routines. This is the tough stage of the tour for them. Once the tour is up and running they will “only” have to do the 2.5hr show!
Out on the tour itself some days seem really quiet until something happens to a dancer during the show, for instance and then full on quick work is required to help keep them going to the end of the show with more remedial work after the show to reduce the impact of any particular injury. I have to be ready for anything and keep my concentration going throughout the day as you just never know what might happen. The working stage show is not your usual workplace. Even with the best people and the most well thought out stage regimes, when performers are performing flat out then racing around in near dark off stage amongst moving props, cameras and glitter bombs (well, this is Kylie after all!) the potential for the odd mishap is there. Thankfully this is extremely rare

A Kylie tour is always one of the biggest and most professional tours on the road. All departments are staffed with people at the top of their game and I always marvel at what they come up with creatively then produce and deliver night after night, venue after venue. It really is a well oiled machine fueled by some of the best catering you could ask for! I always have a separate treatment room back stage at the venues which in venues like the O2 in London (one of the best venues in Europe) is always a buzz especially when you look at all the posters of the world class acts that have played the venue in the corridors. 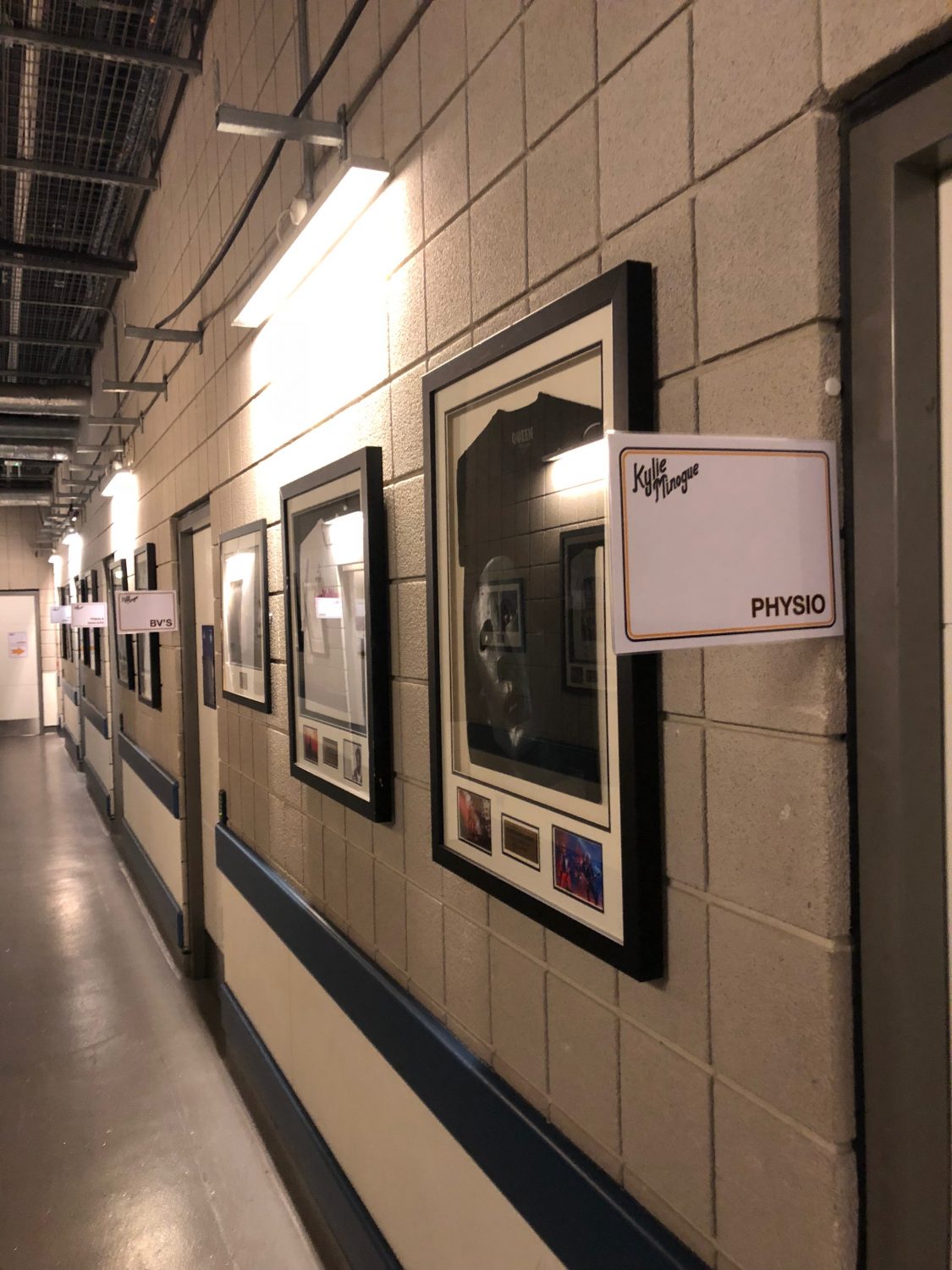 It is often said that when working on a tour you enter the “tour bubble”, an alternative world where the outside world fades away whilst the 120ish tour people roll around the country. If you are ever going to be in a bubble, this is the bubble you’d want to be in! 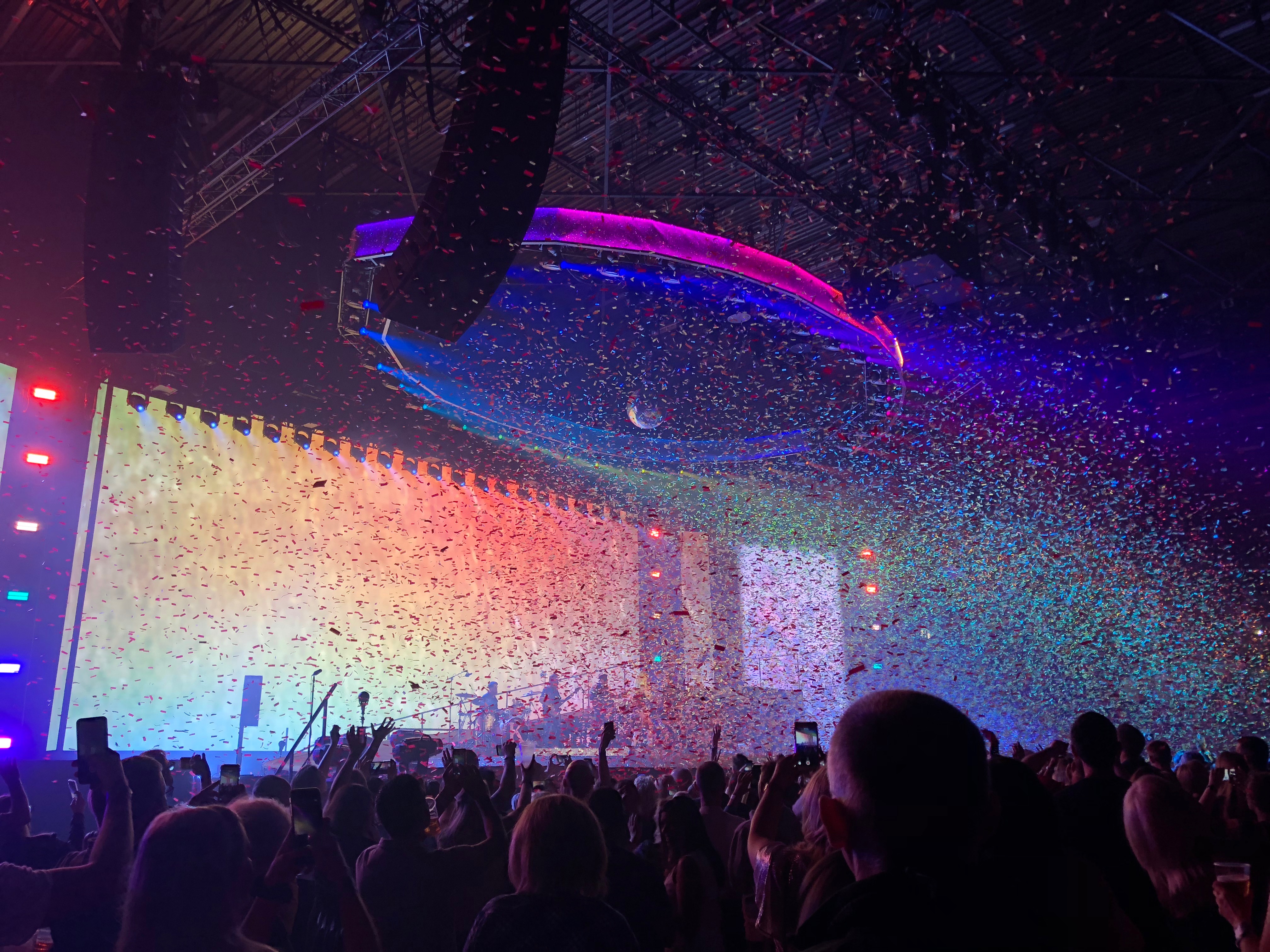 Menu
We use cookies to ensure that we give you the best experience on our website. If you continue to use this site we will assume that you are happy with it.OKNOPrivacy policy