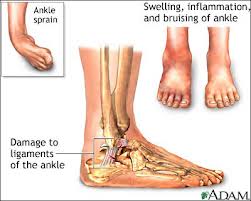 A sprain is an overstretch injury to a ligament. This is a very common type of injury, along with strains, from either a sporting or everyday life setting.
This overstretch can partially or completely tear the ligament.

Ligaments are made from flexible but non-contractile connective tissue. They occur in bands around joints where they join bones together by blending into the periosteum of the bones on either side of the joint. We saw from the strains blog that the periosteum is the tough outer sheath of the bone containing the bone forming cells and the associated blood vessels. They are moderately vascularized and so heal quite slowly.
Ligaments limit and control the range of movement, ROM, at a joint but still allowing motion to occur. In simplistic terms the ligaments could be likened to a strap, which is slack and allows the bones to move freely in the mid range of the joint, but only to a certain point where the ligament will prevent further movement by becoming taut. This protects the bones at the joint from moving so far that they become damaged through excessive wear or to no longer provides the stability the joint has evolved to do. There has to be and end point for joint movement to allow us to stand up against gravity and to move around. Ligaments will allow the muscles to brace some joints so providing stability for movement elsewhere, in our legs, hips and back for instance so that we can move our arms off a stable structure when reaching up etc.

A sprain will occur if a joint is forced beyond it’s normal range, dictated by the length of the ligament especially whilst load bearing. The force causing the sprain can be a sudden twist or wrench due to situations ranging from a football tackle, a car accident or simply tripping on a kerb.

It’s symptoms are usually much more noticeable than a strain as there is considerable swelling and bruising (even with a minor sprain), due to the blood vessels in the periosteum of the bone to which they attach becoming damaged and because there is a lot of pain and dysfunction when attempting to put any movement or pressure through the joint. Sprains will often occur along with other injuries such as strains, contusions and fractures.
A predisposing factor to sprains is hypermobility, extreme flexibility through the joints. This congenital ligamentous laxity means that the joints are not securely limited at the normal end of range for that joint and so are more susceptable to damage and wear as described above. Interestingly the muscles of hypermobile people will have to work harder as the body attempts to use them to make up for the lack of stability from the long ligaments which potentially lead to fatigue and locking issues in those muscles. Hypermobility may be great for dancers but not so helpful for everyday life!
If you have already had a sprain of a ligament then this also predisposes you to more sprains. Anything that alters the biomechanics of a joint so placing more strain on a ligament can increase the risk of a sprain, conditions such as arthritis for instance. 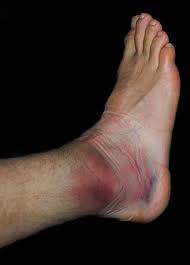 Shows the bruising and swelling due to ankle inversion sprain

The figure shows one of the more common sprains, an inversion sprain of the ankle or “going over on” the ankle during football or off a kerb for instance. Other commonly sprained joints are the knee, wrist and shoulder. The second figure shows a good example of the external appearance of an inversion sprain showing the high level of bruising and swelling mentioned above.

When a sprain occurs the person should immediately follow the Rest, Ice, Compression, Elevation (RICE) procedure as outlined in the strains blog and if possible be attended immediately by a qualified therapist/doctor. Early intervention at this acute stage is key.

Like strains, sprains are generally classified according to their severity as follows.
Grade 1, Mild or First Degree Sprain: There is a minor stretch and tear to the ligament. Upon passive relaxed testing (where either you or a therapist moves the joint in question without using the muscles around the joint) there is no instability. The person can continue activity with some discomfort.
Grade 2, Moderate or second Degree Sprain: Tearing of the ligament fibres occurs. This tearing can be quite variable, from several to most of the fibres. There is a snapping sound at the time of injury and the joint gibes way. The joint becomes hypermobile but is stable on passive relaxed testing. The person has difficulty continuing activity due to pain.
Grade 3, Severe or Third Degree Sprain. Here the ligament itself has either completely ruptured or there has been an avulsion fracture where the boney attachment of the ligament is torn off while the ligament remains intact. There is a snapping sound and the joint gives way. There is significant instability and no end point at the normal end range of the joint on passive relaxed testing. the person cannot continue activity due the pain and instability. Pain will remain during the acute stage but if left untreated in the chronic stage the joint will be painlessly hypermobile in the direction the ligament is supposed to limit.
With either grade 2 and especially grade 3 sprains the person should see a medical doctor. Grade 3 sprains often require surgical repair and will require immobilization in a hinged cast for up to 10 weeks in the case of a sprained knee (but generally 6-8 weeks for other grade 3 sprains).
In the acute stage it important that the joint is rested and fixed so that the damaged ligament is held in a slightly shortened position. If this does not happen then the tear can be held open and fibrous tissue will form in the gap producing a permanently loose ligament with all the stability problems highlighted above, including that of predisposing the joint to more sprains!

As ligaments heal quite slowly due to being only moderately vascularized acute sprains can turn into chronic sprains where adhesions and scar tissue form between them and nearby structures. This can painfully limit the range of motion controlled by the ligament once again predisposing the joint to further injury. Therefor it is advisable, even for grade 1 sprains to visit a qualified therapist who can aid in your rehabilitation. The sooner in the acute stage you can do this the better as they will help to break down these adhesions, restore the joints ROM as much as possible and advise on rehabilitation exercises to help restore good and stable function.